On July 9, 1893, Carl Zeiss patented prismatic binoculars. Civilian models of devices were produced from 1894 to 1907 with 4x, 6x, and 8x magnification, having flat prism covers and a hinge, which was attached to binoculars’ halves with the help of screws. Military models of binoculars appeared in catalogs in August 1895 – those were O.D.F.95 (Offiziers-Doppelfernrohr 95) with 6x magnification   and D.F.95 (Doppelfernrohr 95) with 8x magnification. However, there are suggestions that first prototypes of these binoculars were produced before 1893, as they had to undergo a long military acceptance (Artillerie Prüfungs kommission - APK). In 1902 these two binoculars were replaced by D.F.6x and D.F.8x, which acquired some modifications.
Outwardly, the D.F.6x binocular is similar to its predecessor, the O.D.F.95 model http://binocollection.com/catalog/binoculars-carl-zeiss-jena-odf95.html However, there are still some differences (see photo). For example, the clamping screw for adjusting the interpupillary distance has another construction in D.F.6х. Moreover, the eyepieces’ base diameter in D.F.6х is equal to 20.5 mm and the upper prism cover width is 44 mm (these values are correspondingly equal to 18 and 40 mm for O.D.F.95). The binocular’s field of view was also increased: from 6.2° to 6.8°.
Since 1902 the binoculars were completed with “3/3”-type eyepieces, having a diopter scale (see Hans T.Seeger. Zeiss-Feldstecher, Handfernglaser von 1894-1919, Modelle-Merkmale-Mythos, pp.180-181).
The binoculars frame hinge is attached to its halves with the help of 5 screws from each side. The upper and lower prism covers are made of brass; the device has long “lugs” for a jugular strap, which are attached to binoculars with the help of 2 screws. There are inscriptions “Carl Zeiss, Jena. D.R.P.” on the left prism cover. D.R.P. is an abbreviation for Deutsches Reichs Patent. There is also an inscription “D.F.6х P.№5751” on the right prism cover and it is an abbreviation for Doppelfernrohr 6х Privatnummer 5751. The last inscription means that the binocular has its own number for selling exclusively to military people and in a private order with the permission of military department.  This model was also officially purchased for the army, mainly for sergeant staff. It is worth mentioning that starting from 1904 an inscription in italics was replaced by an inscription in printed letters and the Carl Zeiss logo on Tessar photographic lens scheme background in civilian binocular models. At the same time, military binoculars with inscriptions in italics were manufactured until 1907. The inscription is encrusted with silver (?) alloy and is made in italics.
It is most likely that the binoculars coffer has a later origin (see photo)
The presence of a distance meter grid (see photo) is a rare peculiarity of this old military binocular, which has serial number “2472” and was manufactured approximately in 1904. 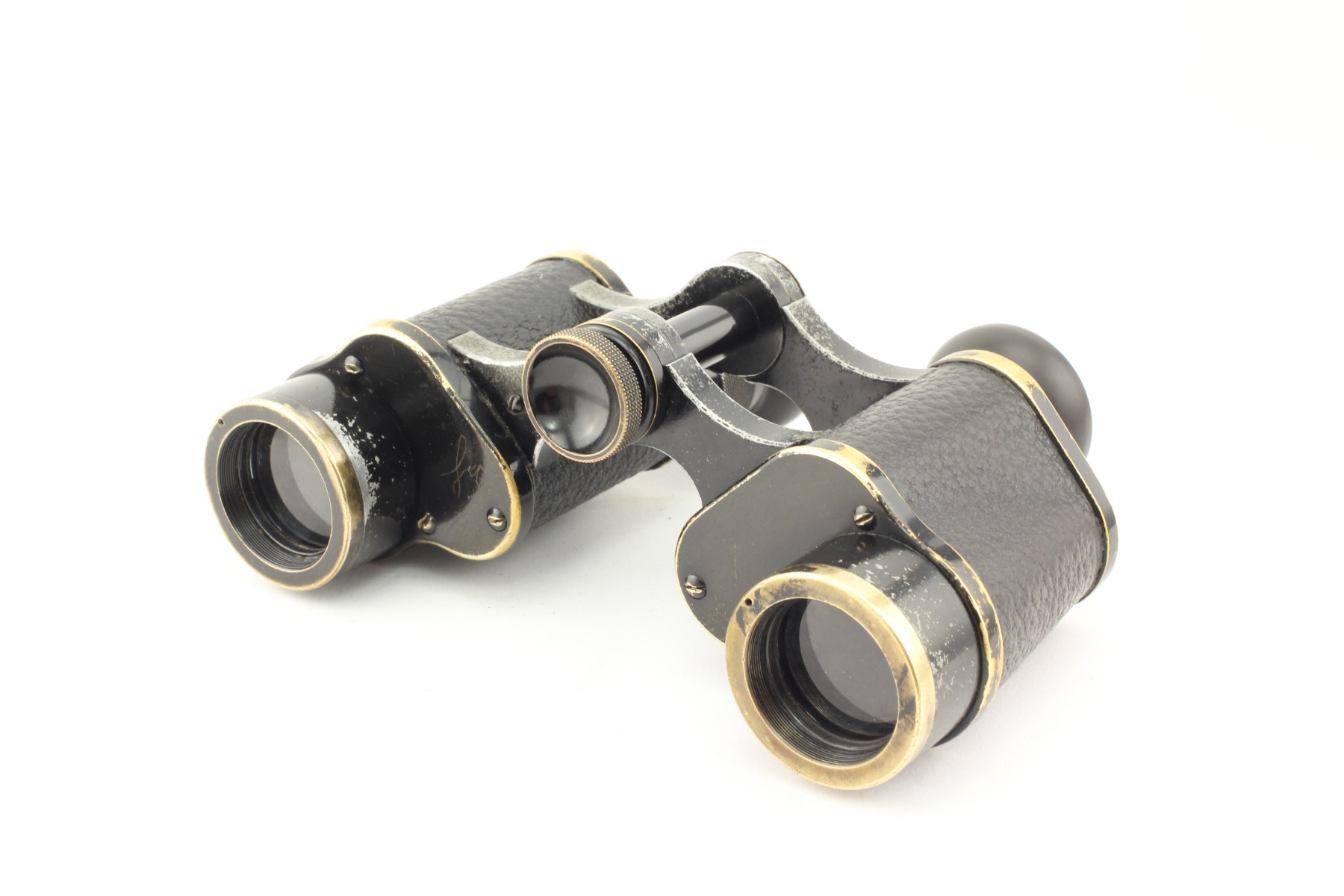