In 1907, Carl Zeiss radically changed the framework and the design of his binoculars, replacing "civilian" models Feldstecher 6 Fach by Telex, Feldstecher 8 Fach by Telact, Jagdglas by Silvamar and Feldstecher 12 Fach by Telefort. The new devices’ detailed characteristics were published in the 74-th volume of Carl Zeiss catalog in August 1907. The optical characteristics were significantly improved in new devices (the field of view and the objective  diameter were increased, optical aberrations were decreased), and the devices’ design was also changed: the central hinge and the “lugs” for a neck strap were not attached to binocular with the help of screws any more, they became integral with it instead, an eccentric objective alignment system appeared and its frame design was also changed, the prism covers spanned the binoculars’ carcass, and they were lubricated with a special compound at the joint points in order to improve impermeability. Moreover, the prisms inside the binoculars were no longer pressed by prism covers – they were fixed with the help of special flat springs instead. It helped increasing the device’s reliability greatly. Actually, the binoculars have survived in such appearance up to present days (see Hans T.Seeger. Zeiss-Feldstecher, Handfernglaser von 1894-1919, Modelle-Merkmale-Mythos, pp.399-414)
Telefort is a “champion” among Carl Zeiss binoculars in the number of its design changes during relatively short period of its production time (from 1907/1908 to the 1920s). There were 5 binocular variants of this model:
1st version: the one, where the lower prismatic cover and the lens frame cap are one component (starting from 1907/1908) and having the eyepieces case with the “transverse” knurling;
2nd version: the one with long double-ring type lens frames, covered with leather and with a short carcass (starting from 1909 and up to the beginning of 1911?);
https://binocollection.com/catalog/binoculars-carl-zeiss-jena-telefort-12x-(1).html;
3rd version: the one with short double-ring type lens frames (1911-1912) https://binocollection.com/catalog/binocular-carl-zeiss-jena-telefort-12x-2.html;
4th version: the one with rounded objective covers (starting from 1912-1920?);
5th version: the higher binocular, not very similar to its predecessors, with long lens frames and eyepieces’ housings, a very rare variant that was produced for a short time in 1914. 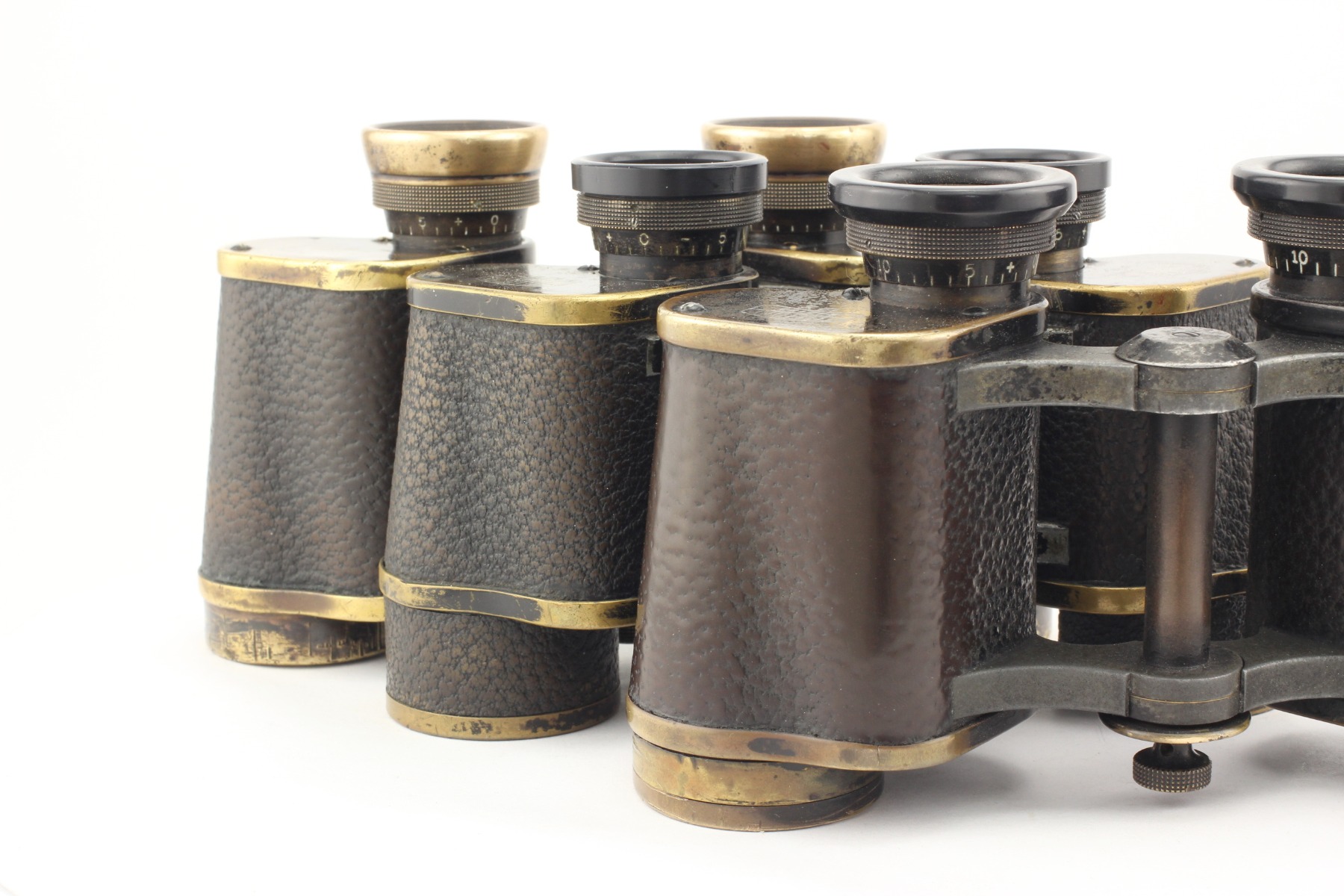 It is a “civilian” model; similar military version is labeled as D.F.12x. The binocular’s “civilian” application is proved by central hinge fixture’s (clamp’s) small diameter (see photo), which has a hole for a knob (included to binoculars delivery kit), with the help of which the hinge could have been finally fixed depending on the observer’s interpupillary distance. The interpupillary distances scale is indicated on the upper hinge disk.
This binocular’s specimen belongs to the 1st version, where the lower prismatic cover and the lens frame cap are one component.
The binocular has eyepieces with base diameter equal to 24.5 mm and the top prismatic cap width equal to 52 mm (see photo). The eyepieces have a diopter scale and the transverse (cross-shaped) knurling. The binocular’s case height (including upper prism cover) is equal to 78 mm; the binocular’s height without lens frame is equal to 67.5 mm. The eyepieces front lens diameter is equal to 9 mm. Rather rare brass eyecups are not peculiar to this model: perhaps, they were made later.
There are inscriptions “Carl Zeiss Jena” on the left prism cover. There is also an inscription “Telefort 161235 12x” on the right prism cover. The inscription is made in block letters with the help of silver solder on the background of Carl Zeiss Tessar photo lens schematic image. Prism covers are attached to the carcass with the help of three screws and they are made of brass.
This binocular’s coffer has features peculiar to coffers of that period: the top cover is made according to seamless technology, there is Carl Zeiss Jena logo (see photo). However, the case’s back has elements with military features (probably they were installed later): a pair of loops for placing case on the waist belt. The hinges are fixed with the help of rivets not typical to Carl Zeiss. Such binoculars were probably used for military purposes.
The device has serial number “161835” and it was manufactured as a small 250 pieces batch in 1909.
The binocular’s model with central focusing, namely Telefortem 12x, came out around 1914. 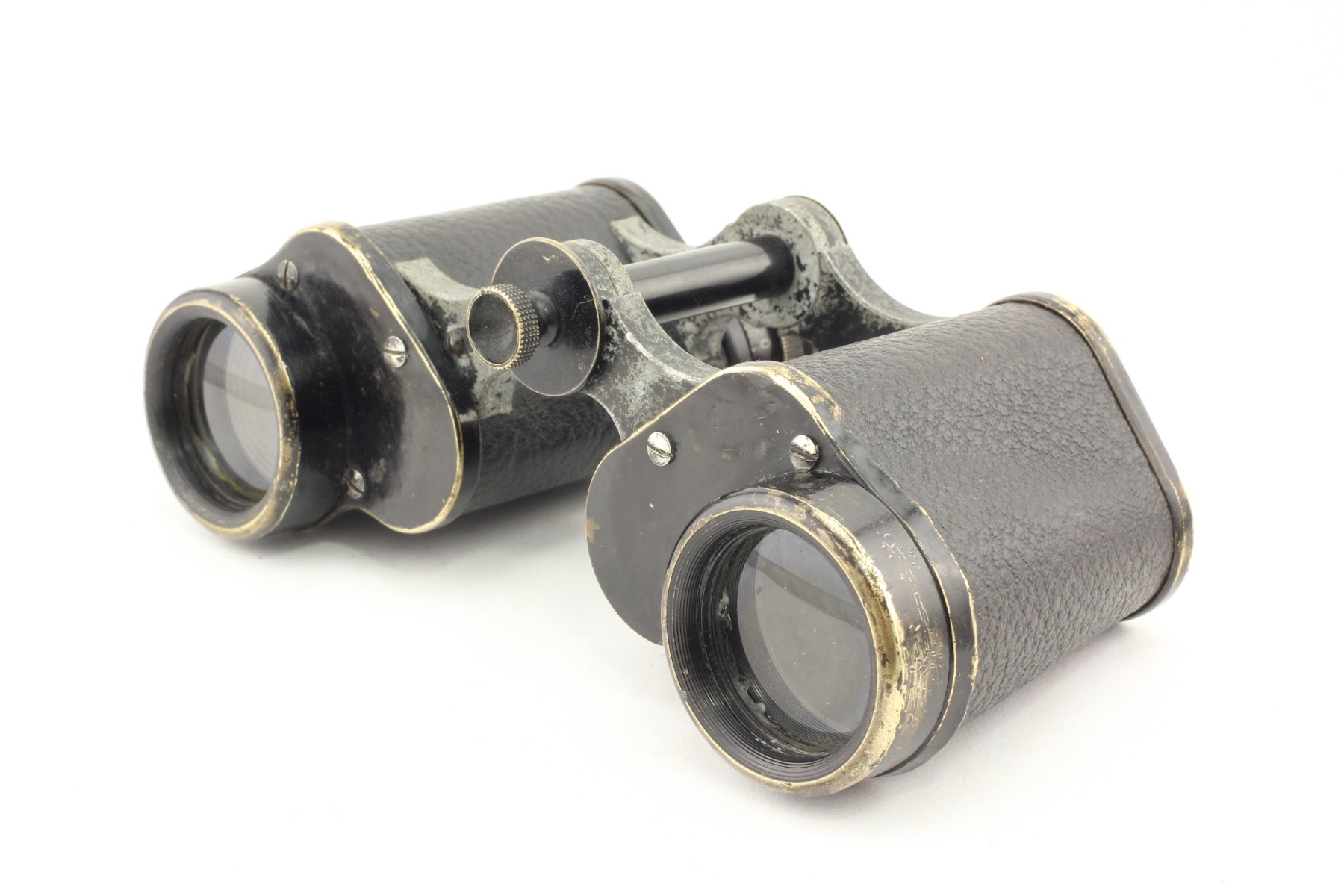 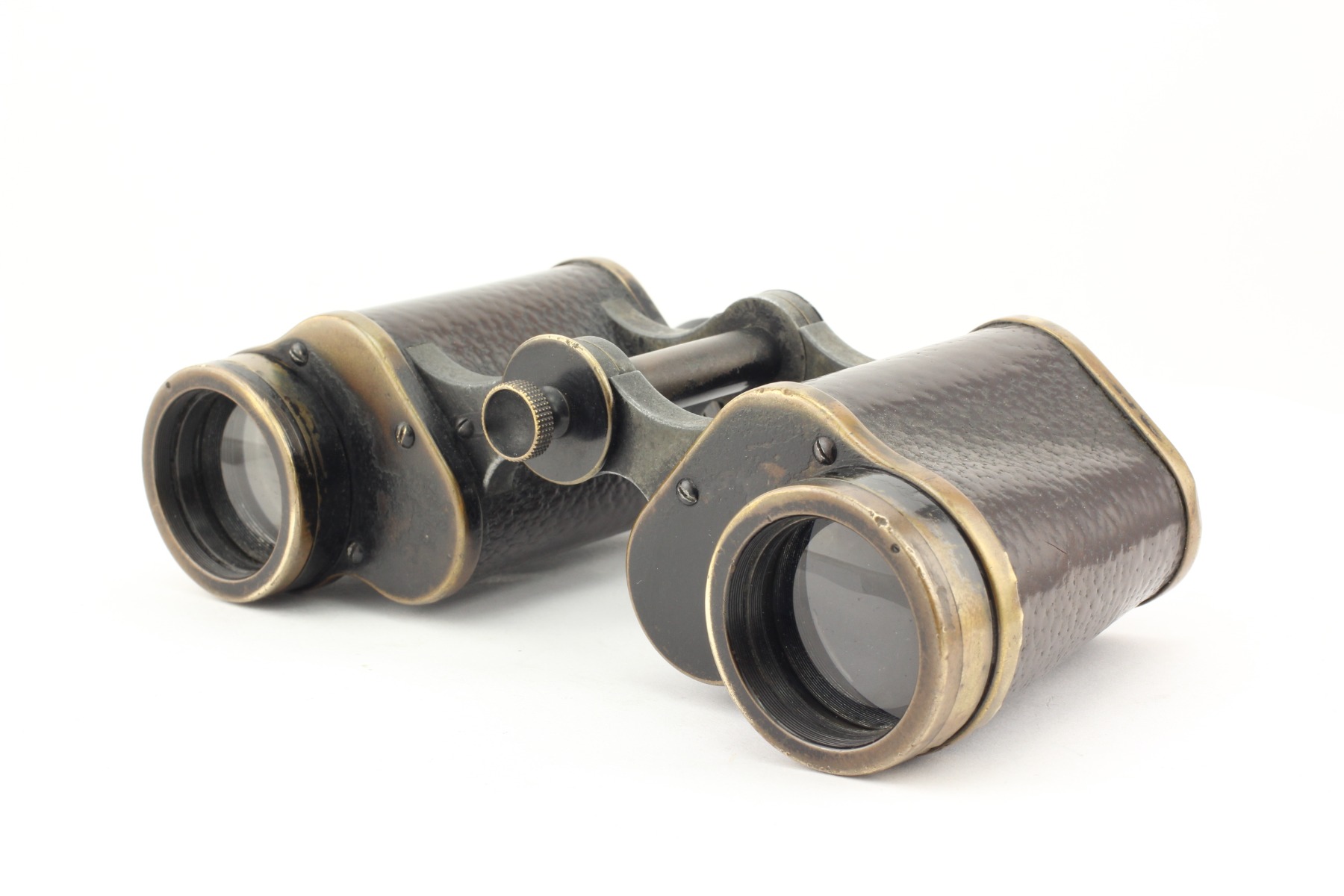